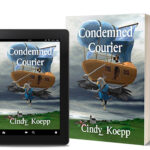 Newly settled on the throne after the death of his father, the young king, Evryt, has only one task: save the throne from the one who wants it enough to start a war and secure it for the one who would rather remain anonymous. After the hard-won peace from years past, Evryt is not about to allow the kingdom to fall into the hands of those that would turn Aelstrian against Aelstrian. Nor will he entertain the notion that the humans should fall victim to slavery and be deprived of the land that the treaty set aside to end the last war.

To accomplish his goal, he needs information, and he needs it quickly. Reluctantly, he agrees to the suggestion of the rapier academy’s lead instructor, Royal Courier Addya Dace. With only a rapier tucked under her wing, her wits, and an unexpected ally, the king’s courier races cross-continent ahead of deadly pursuers to capture evidence of a conspiracy and to deliver it to her king. Along the way, she just might mend a few wounded hearts.